How often do other players call us, multiboxers, boters? Or Multiboters?
A lot, at least in my case. But the thing is that, a multiboxer is far, far away from a bot, in fact, he may very well be one of the most dedicated players around, caring for all those accounts at once, and never giving up in the heat of battle. Whenever i PvP, either alone or with my close friends, i always give everything i have.

The following pic was an answer to a report made by me, the so called boter, on a player that is using 3rd party software to gain honor points. 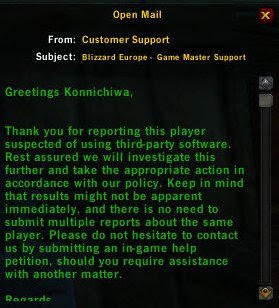 I seriously hope u can tell the diference between a guy controling 5 chars simultaneously, and a guy letting a program control his only char. And also that the person that i reported, get's the account suspended.