Tonight i decided to roll some daily quests for the first time, and also got to see how horrible the place is. Its a gankfest. Horde will hangout in huge groups, just ganking, so i decided to invert it. It was serious bussiness until some brutal started to come and get slapped, so their key to win was to bring 3 mages, that later became 4 lol, all AOE'ing me and Jii da boonkin. It was nice to kill 10 guys around me when they had the upper hand, all with full life..rofl. They managed to put me down some times. In the end i went to help Jii to get his last Heroic Badge for a ring, and when we came out there was still a mage around, that started to pat me...lol...over and over again. He went for the city and continued the spamm, so i decided to go again to the instance and the noob followed. It just took half a second to turn around and one shot him :) rofl, i laughed hard, the guy even tried to approach the guards, but... byebye :P 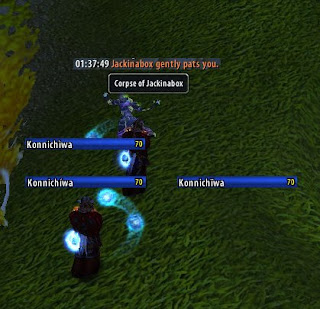 have phun, cya tommorow.
i can't stop thinking of the randoms cutting their wrists trying to kill me llolol